Taking apples for the food bank

I went along with my Mum to the City Mission today, to drop off some surplus apples from my Dad's orchard.

The woman at reception was very pleased and said that fresh produce was a 'luxury' that they don't often get. It made me think that when we have enough in our garden, I'll try and make regular trips down there to donate stuff myself.

If anyone's interested in donating their produce I've given some more details about the wheres and whens at the Slow Food website. 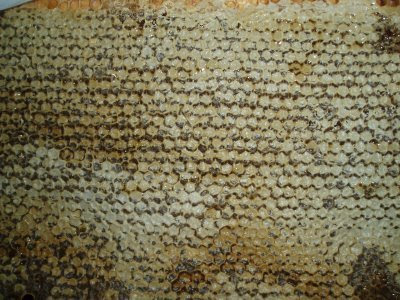 This is the closest to from-scratch honey I will ever get I think! (I just don't have it in me to keep bees.)

At the end of last year we bought an entire frame of honeycomb from Windy Bottom Farm (through Naturefoods).

I think these frames are now selling for around $30, but I'm not completely sure. Hopefully Deb or Ian from Naturefoods will read this and correct me if I'm wrong. 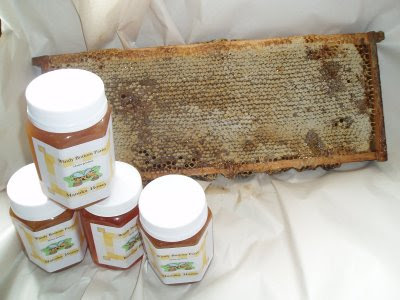 Sadly I seem to have lost all my pics of my son and daughter having a glorious, sticky time processing the honey! Well, you'll just have to use your imagination ... :)

Lost picture 1: Shows the children carefully using knives to cut bits of honeycomb from the frame - to eat as is.

Lost picture 2: Shows the children cutting MORE bits of honey comb from the frame, to eat as is. (It really was particularly delicious honey.)

Lost picture 3: Shows me trying to get organised to extract the honey from the comb, while the children ditch knives and dig out blobs of honey comb with their fingers - to eat as is.

Lost picture 4: Shows the children squeezing cut-out bits of honeycomb in their fists, and collecting the drips in containers, to extract the honey from the wax. (This is how it's done in some places sometimes apparently.)

Lost picture 5: Shows us scoring one rather ravaged frame of honey all over with a knife.

Lost picture 6: Shows the scored frame left to drip over a bucket, to extract more honey from the comb. This method was suggested by Pip in Kerikeri. 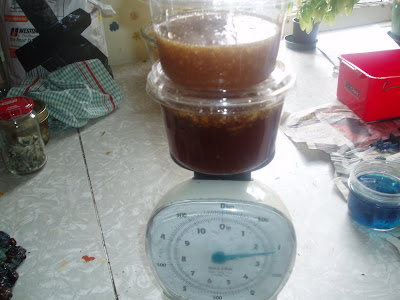 I think we could have collected more in the bucket if we'd scored it a bit differently. Next time I would use a finer blade (probably a craft knife) - and make more scores, closer together.

Anyway, after the comb had stopped dripping into the bucket (the next day) there was still quite a bit of honey left in the comb, so ...

Lost picture 7: Shows my children at it again with the squeezing ... I tried to keep track of how much extra honey we got doing this but lost my scribbles. It might have been another 150g?

Lost picture 8: Shows the empty frame (good for kindling) and the crumbly looking remnants of wax after all the scoring and dripping and squeezing was done.

And then this was interesting to me ... I saved those remnants of wax for ages. They sat in a bowl on the kitchen bench for a good three weeks, frequently eliciting from visitors an, 'Ew, what's that?!'

Well, I told them - it's wax. And when I get around to it, I'm going to melt it down to separate the last bits of honey out from it, and then I'll use it to make balms or lotions.

Finally I did get round to melting it down, and lo and behold - it produced only the thinnest crust of wax on the top. The rest was actually still honey! I'd say around 300g of it!

So the lesson I learned from that is that there's a lot MORE honey and lot LESS wax in a honeycomb than I thought! (The wax was fun for the kids to play with, pouring it over ice-cubes, dipping things in it, and making a couple of wax stamps for envelopes, but there wasn't enough for more than that.)

I'd estimate that overall we got about 1.5kg of honey from the frame, plus all the comb my children ate! But the money we spent on the frame was worth it for the children's experience alone.

If I did this again, I'd probably be more methodical:

First cut out some tidy blocks of comb for the children, and also to give as gifts to people who like honeycomb.

Then do the score-and-drip thing, with a finer knife so as to get as much raw, unheated honey from the comb as possible

Then melt all the rest down at the gentlest heat I could manage.

I'd probably dispense with the squeezing altogether (although it was fun!)
Posted by Johanna Knox at 6:44 AM 3 comments: