I may be being paranoid, but I'm wondering about shelving our plans to make mustard paste from the wild turnip seeds we collected.

Wild varieties of Brassica rapa - like the one we've been picking - can have a lot of erucic acid in the seeds. (Apparently nasturtium seeds are also rich in it).

On the other hand, we only collected a miniscule pile of seeds, and from what I'm reading in articles from various food safety authorities, a tiny bit consumed on a very occasional or short-term basis is probably okay.

I'll do a bit more research.

As a plan B, there's some Shepherd's Purse, another member of the mustard family, growing along the bank beside our house. Perhaps we could try making mustard from the seeds of that instead (assuming they are less rich in erucic acid).

They're absolutely tiny, those Shepherd's Purse seeds, and it would be fiddly, but it could be fun. My daughter is already quite taken with this plant's little heart-shaped seed pods. 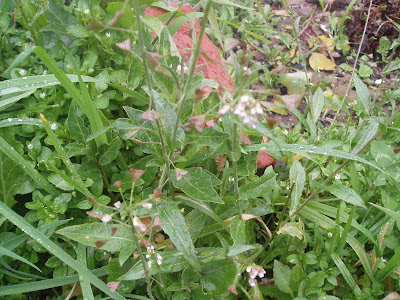 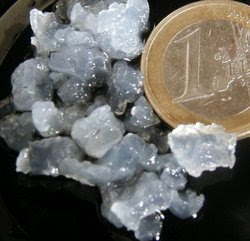 It started unportentously enough. Deb from WAPF asked me if I still had the water kefir grains she had given me last year, as hers had died.

I checked. Mine had died too. Not that there was anything too ominous in that; I (unlike the conscientious Deb) can be a bit crap at looking after live ferments, and I had certainly neglected my water kefir.

It wasn't until Deb started contacting other locals, and finding theirs had died too, that things started to look a little bad.

Then I read Kaitaia smallfarmer and fermenter Rebecca's blog. Yes, her water kefir had also died, and she was looking for more. (Turned out she had already been in touch with Deb.)

Deb, Rebecca, and others were soon busy getting in touch with all their fermenting contacts throughout the country, but it seemed there was no healthy water kefir to be had here at all. Water kefir was extinct in New Zealand!

So Rebecca ordered some from the very knowledgeable Dom in Australia. It was quite expensive, and it took a while to arrive - but she finally has it and is growing it carefully in the hopes of soon having enough to distribute.

Why did everyone's water kefir die? Well, Deb and Rebecca have been researching how best to look after it, and it turns out to be pretty high maintenance - the diva of live ferments. If it doesn't get the service and attention it demands, it sulks mightily and eventually turns up its precious little toes and expires.

When there's enough water kefir to go around again, I'm going to have another go at keeping it. I'm a little nervous about it though ...
Posted by Johanna Knox at 8:49 AM No comments: