And now for some fluff 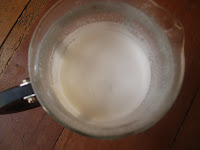 My children say they have outgrown fluffies. Meanwhile I seem to have grown into them. Lately, in an effort to reduce my caffeine intake, I've been drinking frothed-up milk flavoured with rose or lavender.

To make the lavender fluffies, I heat up milk in a lidded pot, along with with a sprig of lavender from my daughter's flower garden. When it reaches scalding temperature I add a bit of honey and stir it in. Then I take out the lavender, pour the milk into the coffee plunge-pot, and plunge the plunger up and down till the milk has frothed up.

I LOVE lavender as a drink. (A spoonful of lavender vinegar in chilled water is strangely nice too.) Lavender is supposed to help with focus and metal alertness, so I've convinced myself it makes a good substitute for coffee. 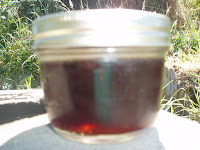 I like fluffy milk with a dash of rose-petal tincture as well. My parents have some beautiful dog rose bushes, and a few weeks ago I collected a bagful and tinctured them in vodka.

I collected a second batch of petals a couple of weeks later, strained out the old petals, and put the new ones in for a couple more weeks, to make a double tincture - so it's strongly fragrant. 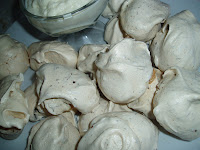 And speaking of white fluffy things flavoured with rose - I was really pleased with the rose and chocolate chip meringues I made a wee while ago. I just added a couple of spoonfuls of rose petal tincture instead of vanilla to the meringue mix and folded the chocolate chips in.

I think it would also work well to put the rose flavour into the whipped cream instead of the meringues.

I guess to come full circle I need to make lavender meringues now ...
Posted by Johanna Knox at 3:10 PM No comments: