Identifying Red Dead Nettle is relatively easy at the moment, in the lower North Island anyway. Maybe in other places too. It's in full flower round here, and apparently also all round Palmerston North. It's much easier for an amateur like me to identify when it's flowering.

This is a Red Dead Nettle plant in our garden. 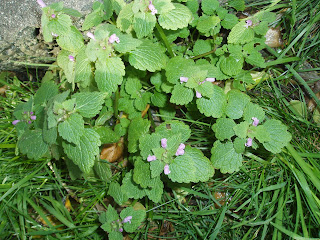 Red Dead Nettle (Lamium purpureum) isn't really a nettle. It's from the mint family. Its leaves have a very mild taste, especially the small, young leaves. You can eat them raw or cooked. I prefer them cooked - they're a bit hairy raw!

We had some in an omelet the other night. That was nice. 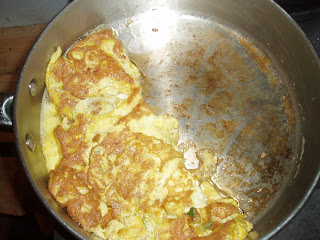 Red Dead Nettle is closely related to Henbit (Lamium amplexicaule), which also has edible leaves ... However, both plants can be confused with Staggergrass - which I'm pretty sure is NOT edible. (I haven't found any references to people eating it yet, anyway.)

Staggergrass has a hairier stalk than the other two, so that's one way to tell the difference and avoid it.

There are a couple of websites that I've found helpful in telling these three plants apart (and reassuring me that what I have in my garden IS Red Dead Nettle). Firstly there's the Massey Weed Database. And then there's the Virginia Tech Weed Identification Guide.

I wouldn't eat the flowers of either Red Dead Nettle or Henbit. I haven't read anywhere that they're edible - but I'm always more than happy to be corrected!
Posted by Johanna Knox at 7:58 AM 8 comments:

The easiest yoghurt ever 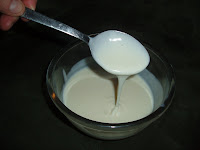 I love my Caspian Sea yoghurt!

It's true that I didn't perservere as determinedly as I could have. But since getting this Caspian Sea yoghurt (from Deb at Wellington WAPF) I haven't seen the point in trying to make regular yoghurt again.

Making Caspian Sea yoghurt seems almost failsafe, and perfect for people like me for whom precision is not a strong point.

Put a few dollops of the starter in a clean jar. Add any kind of milk (or cream). Then put the lid on, shake it around a bit, and leave it somewhere that's not too cold. Open it up the next day, and there you have it! A jar of yoghurt!

(This may not seem so amazing if you're used to success with yoghurt, but for me it's nothing short of miraculous. I feel like Rumpelstiltskin spinning straw into gold.)

Caspian Sea yoghurt, also called Matsoni, originated in Georgia apparently, and was introduced into Japan in the 1980s. It contains yeasts as well as bacteria - so it tastes very like ordinary yoghurt, but with an extra yeasty tang. It also has more of a gloopy, viscous texture.

So far I've used it in curries, smoothies, dips, and for Bircher muesli. Next on the to-do list is a frozen yoghurt dessert.

There are some interesting community swap networks getting going in Wellington at the moment - as well as a Really Really Free Market happening in town on Buy Nothing Day - November 29.

I'm hoping to be there with great mountains of Caspian Sea yoghurt.
Posted by Johanna Knox at 7:43 PM 3 comments: