The sugar beets aside, this is what I've managed to do over the last couple of weeks ...

Plant something: More peas and snow peas. Lettuces. Leeks. Red bunching onions. Plantago. The peas and lettuces are looking good so far. Nothing else has popped its head up at all yet.

Harvest something: Chamomile flowers (the more you harvest, the more they produce). Self-heal (starting to take over the herb garden). Wild red clover flowers. The last green tomatoes. More dandelions for cooked greens and coffee.

Preserve something: Dried the chamomile flowers, self-heal and red clover flowers. (The clover I'm going to send out in little packages to some people by way of a token apology. A few weeks back I was meant to give a foraging presentation - but for various reasons, at the last minute I couldn't. I still feel crap about it.)

Eat the food: Made a new recipe for lambs brain curry with my son. We are ever trying to build up our repertoire with cheap cuts and offal ... The lambs brain curry is a good one because you add the lambs brain at the last minute. That means you can take out some of the curry before adding the brains and reserve it to serve to those who don't eat offal or any meat at all.

Posted by Johanna Knox at 8:22 AM 4 comments: Links to this post 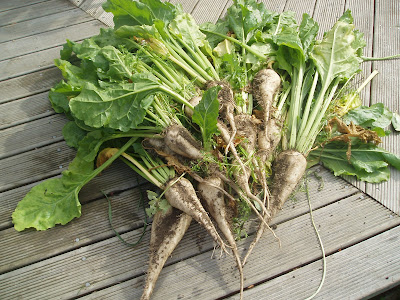 I only planted a tiny patch of sugar beets this year, as an experiment. (Most of my gardening has been experimenting really - it's all pretty new to me - although I'm lucky enough to have a Dad who is something of an expert, although he's too much of a perfectionist to see himself that way ... He was the one who suggested I try growing sugar beets one time when I was off on a wishful thinking tangent about growing maple trees ...!)

I was thrilled to bits by how well the sugar beets grew. That's our harvest above - not alot - but enough to try a few different things with:

1. Leafy greens
The sugarbeet greens were enough to meet all our green vege needs for a week. They are a bit thicker and more leathery than other beet greens I've tried - so I treated them more like kale.

2. Raw beets
I thought they might be nice grated raw in salad, like beetroot is. One taste of a few gratings was enough to put paid to that idea. Raw, the sugar beet was very bitter and, worse, burned my throat as it went down.

3. Roasted beets
Again, treating them like beetroot, I tried roasting some chunks in oil along with some other root veges. Success! The texture was like roast beetroot. The taste - very similar but even sweeter than beetroot. Because of the strong sweetness, I wouldn't eat them roasted on their own. But mixed in with other veges - yum.

4. Fermented beets
I have some grated sugarbeet lacto-fermenting in brine on a shelf. I put a bit of carrot in there for colour, too. It's fermenting very slowly - because of the cold weather I suppose - and I'm not sure how nice it's going to be.

I tried a taste yesterday and it reminded me of old dishcloth smell. (I haven't had much luck, taste-wise, with fermenting beetroot either.) Still, I think it could be improved with a bit of onion and spice. I might try adding some.

5. Beet syrup for lemon cordial and water kefir
After I'd tried all those other things, I peeled and finely sliced all the rest of the sugar beets and boiled them to make an enormous batch of sugary syrup.

I started out using the method here. At first I didn't boil the mixture down as much as the recipe says. I left it fairly watery (it was still very sweet)and tried using that for a couple of things:

I fermented some water kefir grains in 50/50 water and sugar beet syrup. The kefir grains seemed to like it! And the result was nice. A slightly more interesting taste than kefir made from just cane sugar and water.

I also used it in some lemon cordial instead of sugar - and both children gave it their stamp of approval.

6. Beet sugar crystals
I really hoped to be able to boil the syrup down and crystalise it, as the recipes said. But for whatever reasons, I didn't seem to be able to get the crystalisation to happen. Maybe I just didn't boil it down enough.

What I ended up with was just a thick syrup - super sweet - and quite bitter. I noticed though, that it loses obvious bitterness when diluted, so this doesn't seem to be a problem.

I froze this very reduced syrup in ice cube trays to chuck into the blender for smoothies instead of honey - and use for whatever else.

I'm really happy with the sugar beets, and hoping to grow more of them this year, and try a lot more things with them.

Maybe I can even power our car with them. Or maybe not.

No, I don't need another blog in my life - but I did so want to do this one.

After many weeks of picking other people's brains, and mulling it all over, I've set up the Quiet World project for booklovers.

I'm hoping to update it every Sunday.

And my next post here really will be about sugar beets!

Posted by Johanna Knox at 4:08 PM No comments: Links to this post