Something foraged, something fermented

Last night we had big chunky potato wedges - made from a mix of huakaroro and urenika potatoes - with chickweed pesto and kefir sour cream on the side. 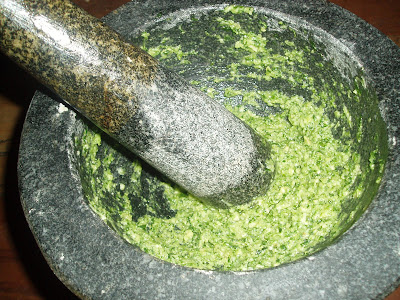 Actually I'm going to stop calling the chickweed thing 'pesto', out of deference to Italian friends! It wasn't a true pesto, but was a paste based on this pesto recipe.

I used chickweed instead of basil, and cashew nuts (soaked and dried) instead of pine nuts. I was pretty inaccurate with measurements, and when I had a taste and found I'd put in far too much garlic for me to bear, I added a whole lot more cashew nuts. It turned out deliciously in the end!

(Speaking of foraged herb pastes, Hannah from World Sweet World has had success with Nasturtium leaves.) 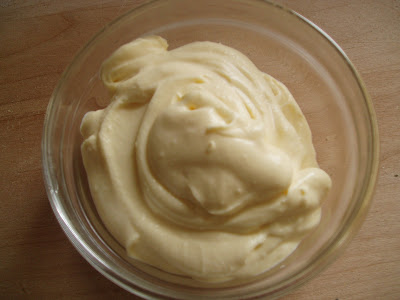 The kefir sour cream was a batch I'd started a couple of days earlier. I put all our milk kefir grains in with 400 grams of organic cream and left it for about a day and a half in a warm cupboard, then strained out the kefir grains.

Usually when I've made sour cream this way, the cream has a tendency to separate, and after straining out the kefir grains the soured mix is still not thick enough. I have to leave it to sit for a few more hours to separate again, then spoon off just the creamy stuff on the top to use.

However, this time the cream must have been extra thick because it didn't separate at all; it just fermented into one big mass of sour cream!
Posted by Johanna Knox at 12:33 PM

Johanna - this looks sooooo good ! Must give the pesto a try. Gotta find some chickweed.........

This looks amazing... I turned down some kefir grains last week, because i couldn't imagine actually suing them, or wanting to eat the product, lol. Darn!

Hi Lishelle - If you'd like some kefir grains, I think I have enough now to split them and give a batch away? Would you be interested?

I'd post them to you. I've been told that they can be a bit trickier to post than caspian sea yoghurt (which is the only thing I've ever posted before) - as they let off a bit of gas as they ferment, and can leak, but the weather's still cold enough that we might be able to get away with it ...

What do you think?