I've started a small temporary blog, putting together a list of Canterbury small businesses that it would be good to support post the quake. So far lots of gorgeous crafts and craft supplies, lovely seeds and plants, and more.

It'll be in blog format for a while, then when I find out about a few more businesses, I'll convert it to a categorised list,  and try and promote it a wee bit more widely.

The blog is here - http://chchsmallbusinesses.blogspot.com/

If nothing else, I'm enjoying discovering more exciting small businesses and businesspeople through putting this list together.

I'm not in any way saying people should drop all support for their own local businesses to support the Canterbury businesses, but I know that if a disaster hit that impacted my own business, I'd porbably be keen for a bit of extra buyer support while things got up and running again! :)

If you know of any Canterbury businesses you'd like to see get some extra buyer support from round the country, please let me know!
Posted by Johanna Knox at 1:53 PM 5 comments:

Despite good intentions, I haven't managed to write anything here for ages, and it will be a few more weeks before I do, as my family and I work through various life logistics! I'm so over moving, but it looks like we will probably do it one more time.  (Details of timing and destination TBC.) 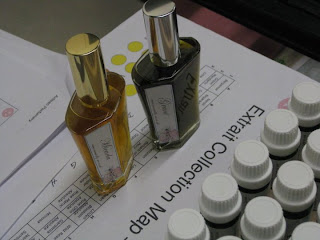 In September I met Alec Lawless - a highly successful artisan perfumer from the UK who uses almost all natural botanicals in his fragrances. He was teaching an artisan perfumery workshop in Wellington. (A first for NZ as far as I know!)

He appeared on the Good Morning Show while he was here - you might have caught it.

His workshop was a huge success, so he's back to do just one more in early January. 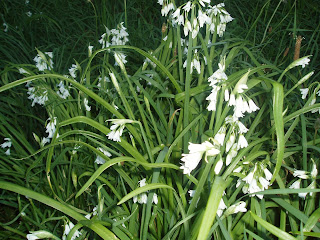 Onionweed is in full, lush bloom, so it's time to dig out the onion flower tempura recipe again.

I'm told by Kiwipurler that tempura should really be made with rice flour and will be extra crispy and delicious that way, so that's what I'll try this year.

In other foraging news, Lus has a great post on chickweed on her blog.

Also, I gave a talk yesterday morning on foraging to the Kapiti Herb Society. They are an amazing, friendly, and LARGE group! I really enjoyed talking to and with them, and I think it went well - apart from the bits where I was overcome with klutziness and did things like walk in front of the speaker with the microphone (twice), making everything screech and deafening everyone (twice).

The different local herb societies around the country are branches of the national Herb Federation - which incidentally has a great website. Of particular interest are their Data Sheets which include some brilliant information on a number of foraged herbs.

As the aftermath of the Canterbury earthquake unfolds, it's amazing to see how having a solid community currency system already in place is helping some people cope, and get the help they need rapidly.

Canterbury's Lyttelton has a particular type of community currency system called a Time Bank - where hours of your time are the currency, rather than any form of 'dollar'.

Through a Time Bank, members generally trade services rather than goods, and everyone's services and skills are valued equally. Spending an hour on someone else buys you an hour of any other person's time.

The Lyttelton Time Bank has a fantastic website here - and this the media release they have just put out about their role in the earthquake relief efforts:


From Project Lyttelton (9 September):
Lyttelton has something to share with New Zealand.
No, we don’t wish a 7.1 earthquake on to the rest of New Zealand, nor an ongoing swarm of nerve stretching aftermath earthquakes.
We can share some of the stories that are unfolding. And the most telling story is about ‘the how’ we are dealing with the situation.
Lyttelton has a Time Bank. Time Banks facilitate the sharing of skills within a community. Every task undertaken is measured not by a dollar value but by the time it takes to do the job. Everyone’s time is equal. Everyone is valued.
With no real Civil Defence presence in Lyttelton, the local volunteer fire brigade and the Health Centre turned to the Time Bank.
Quickly and efficiently all Time Bank members (10% of the local population) were notified, tasks identified, teams organized.
A central drop in point at the Information Centre was established. People could check in and have a chat over a cuppa. Ease the tension of waiting for the unknown.
And the good thing, once the dust has settled and life returns to a more normal pattern, the camaraderie, the sense of connection, the care and love for one another within the community won’t disappear. This will remain even when the immediate needs created by the earthquake subside. The Time Bank will continue to function, to build on these human connections, to continue to create an alive, vibrant community.
What community wouldn’t want one!
Posted by Johanna Knox at 1:05 PM 3 comments: 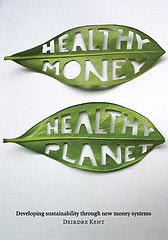 Whenever I ponder the economic crisis (recession/coming financial apocalypse/whatever you want to call it) I come back again and again to the usefulness of local currencies and alternative forms of trading -  vital tools that could help enable ordinary people like me to cope.

Just lately I've started thinking about it all a lot more, and I thought I'd blog a semi-regular diary about it. I'm calling it the 'Healthy Money Diary', after a book I read the summer before last - Healthy Money, Healthy Planet by Deirdre Kent.

(Highly recommend! A fantastic, clear explanation of the global financial system and its failings ... plus a detailed look at alternative forms of trading within communities).

I really feel right now that I want to increase my involvement with alternative forms of trading and currency.

The flames of my interest were fanned a few weeks ago when I got to meet Helen Dew at a Wairarapa craft fair. If you don't know Helen, she is a highly respected and long-time advocate of community currencies, and a board member of the Living Economies Educational Trust. My part in the conversation with her consisted mostly of a lot of vigorous head nodding.

I sat on my thoughts for a bit. Then over the past week I had a couple of other fortuitous meetings:

* I discovered that an anonymous crafter whose blog I had just started reading (thinking this person has some extremely interesting things to say) is actually someone I slightly know in real life! I was thrilled.

I have been especially thinking about this post of hers about a wool mill closure in the South Island, and the ensuing comments. It's the kind of thing that I can foresee happening increasingly often over the next few years. I don't know the answers, but I feel sure they rest at least partly with finding new ways to trade and support local small business.

* Then on the weekend I had the opportunity to meet and chat in real life with Isa - The Nourishing Revolution blogger, which was lovely. We talked about the state of the world, as you do, and yes she is just as full of insights and ideas as you would expect from her blog! I felt galvanised to act after talking with her. (And it wasn't just the two coffees).

So here I am, inspired by the things other people say, and their passion and enthusiasm, determined to try and find different ways in my own life to trade. I don't exactly know what I'm going to do next, but I'll just work away at it, and blog my thoughts as I go (maybe once a week or so).

Oh! And if you are interested in a copy of Healthy Money, Healthy Planet, it is available here. (No, I don't get a commission.) :)
Posted by Johanna Knox at 12:55 PM 3 comments:

Call me slow, but I didn't realise just how amazing Ti kouka and their rellies were until recently!

Today on This Way Up at 1.30, I'm chatting with Simon Morton about them, and I've just put up some info about them on Wild Picnic.

Next time I have a garden, the first thing I'm going to start planting is cabbage trees!
Posted by Johanna Knox at 8:32 AM 10 comments:

Scented yarn and beads for sale! 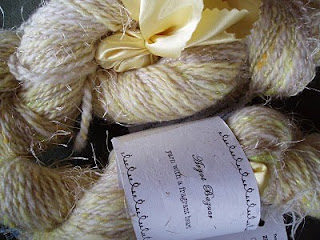 I've just taken the leap into selling handmade craft supplies. So far I've got a very small range of handspun yarn and beads available -  all scented one way or another with beautiful quality essential oils, absolutes, and extracts. (All natural botanicals - no synthetic fragrances).

I sold my first skein of wool and packet of beads at a small craft fair in the Wairarapa on the weekend, and other items are available at my new blog - Argot Bazaar ...

I'm in the throes of setting up a shop on Felt.

What I hope for is to have lots of fun experimenting with and learning new things in spinning and bead-making and fragrance - and to produce some appealing raw materials that others will see potential in for their own creations - and for it all to somewhat pay its way! (Well, okay, maybe the paying its own way bit is kinda over optimistic ...) I'll be adding new things to the site often.
Posted by Johanna Knox at 1:11 PM 4 comments:

Thanks for the entries! I wanted to send everyone some. But winners drawn with closed eyes and lots of swirling round of the paper are - Nikki and Gillybean! Could you drop me a line with your addresses? My email is johanna dot knox @ gmail.com
Posted by Johanna Knox at 8:13 AM 3 comments:

The newest issue of Good Magazine is out - and includes an article  I wrote about the growing natural perfumery movement.

It was a lot of fun writing this article and talking to all the perfumers from around the world. I could only include a fraction of the fascinating stuff they told me, so over the next little while I'll feature longer interviews with some of them on this blog, like Ambrosia Jones and Charna Ethier.

The article is in Good's Smarter Living section. Table of Contents here! :)

P.S. If you haven't entered my draw below - for a 2ml sample of a delicious natural perfume, and you would like to, enter now. I'll draw it on Sunday.
Posted by Johanna Knox at 9:52 AM 3 comments: